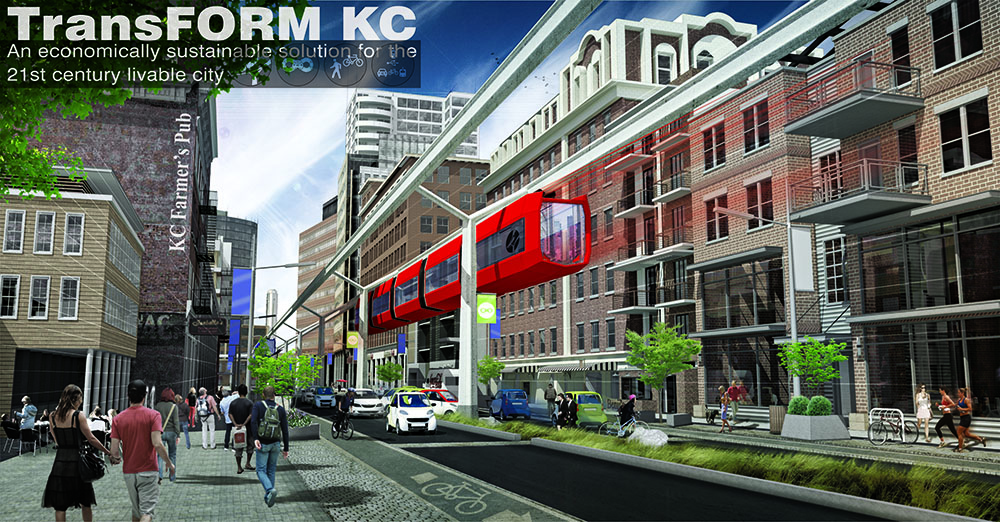 Transform KC is a joint effort between the Kansas City Regional Transit Alliance and the American Institute of Architects Kansas City Young Architects Forum. Together they have created a Calls to Ideas in which anyone was able to submit an idea for what they feel the future of rail should be in Kansas City. SDA’s very own Benjamin Hall has submitted his own idea, focusing more on a holistic approach to the transportation needs of Kansas City, and the 21st century American City in general. Benjamin’s approach was to create network of innovative modes of transportation while remaining both economically and environmentally sustainable. Below is an excerpt from Benjamin’s proposal…

“Cities happen to be problems in organized complexity, like the life sciences… The variables are many, but they are not helter-skelter; they are “interrelated into an organic whole.”

Jane Jacobs, “The Death and Life of Great American Cities”

In an effort to decrease traffic congestion, and improve the lives of city dwellers, a multi-modal transit plan must be implemented that combines public policy with good design. All modes of transportation should seek to be unsubsidized, and entirely self-sufficient.  As with any sustainable trend users of such modes of transportation should not have to feel as though they are making sacrifices, but rather gaining from it. Public policy should focus on the densification of urban environments rather than attempt to master plan them. Densification is the key to the success of any mass transit system, to include cyclist and pedestrians.  A diversity of businesses mixed with residential, and public institutions must be inseparable to assure activity at all times of day and prevent desolate public spaces where criminal activity thrives.  Cities must be thought of as problems of organized complexity where the only solution is a coordinated effort among many disciplines that first seeks to thoroughly discover the issues at hand, and solve them with the combination of appropriate policy and GOOD design.