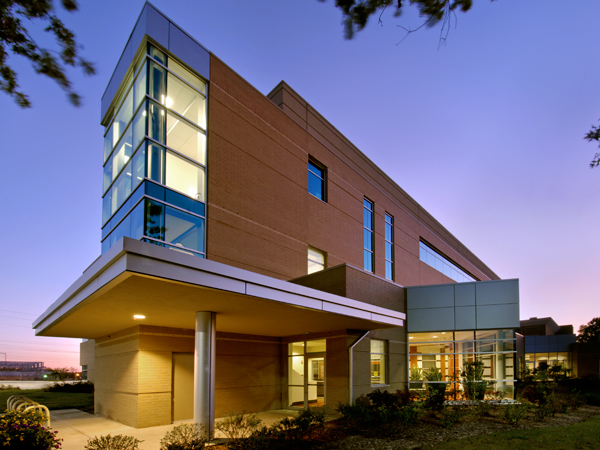 Associated Electric Cooperative has recently completed a new office building tower to its existing campus to accommodate current and future needs.  This 50,000 s.f. 3-story facility includes a basement and will house Executive offices, Training rooms, Board of Directors Meeting Room, and Engineers workstations for Power Marketing and Power Production.  A variety of Conference rooms and meeting rooms are strategically placed on each floor to accommodate multiple departments.

The Geo-thermal mechanical system was one of the most significant decisions made during the design of the new AECI.  This HVAC system, also called ground source heat pumps, is among the most energy efficient systems available.   For this project, it is projected that operations of the building could achieve as much as 42% savings over a typical non geo-thermal forced air system.

So much of the energy consumed within a building is contributed to the lighting of thebuilding.  For this project, high efficient light fixtures were specified.  Appliances were specified with the ENERGY STAR label.    Cool roofing material was specified.  These light colored building materials reflect rather than absorb solar heat, thus avoiding the “heat up” of the building and eliminating the need to run the cooling equipment for as long.

The same approach was taken in choosing pavement.  Light colored concrete was used rather than asphalt to eliminate the “heat island effect”.  Dark asphalt pavements reflect heat into the atmosphere adjacent to building and can significantly increase the ambient temperature.  This puts greater demand on the building’s cooling systems driving the cost of energy consumption up.

One of the most effective ways to reduce the consumption of energy is to construction a building with outstanding thermal resistance.  This is called the R-value and SDA designed the roof and wall systems of the AECI building to maximize the r-value.  R-value for wall, by code, has to be R-13.  AECI exterior walls are R-37.  For the roof assembly, the code requires R-15 and we designed a system that is R-26.  Insulation is one of the cheapest ways to enhance thermal resistance.  Low-E and reflective coatings were used on the glass to maximize the window’s thermal performance.

Water conservation is an important element of “green” building.  To achieve a 20% reduction in water usage, high efficiency plumbing fixtures were specified.

The goal for this project was to divert 75% of trash that is generated to sources that will recycle the materials for other uses.  Trash was segregated on the job site and construction waste contracts arranged for their responsible removal.

The AECI building addition endeavored to specify as many building materials as possible that are regional (within 500 miles of the project), which decreased transportation costs and helped support the local economy.  The goal for the AECI project was to procure 20% of the building materials regionally.

To achieve a healthy work environment, the air quality must be maintained.  During construction, special care has been taken to assure ductwork is not contaminated while construction activities are going on.  Many materials give off harmful gases called volatile organic compounds, or VOC’s.  This is known to contribute to a “sick building syndrome”.  SDA specified the maximum amount of VOC’s allowed for items such as paints, sealants, adhesives, and carpets to insure healthy indoor air quality.